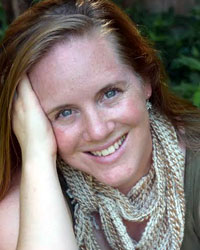 Andrea Nissen is an award-winning fiber artist based in Fayetteville, North Carolina. As the founder and owner of Iona Rose Studio LLC, a mobile sewing and fiber arts studio, she travels the United States sharing her lifetime of experience and knowledge with students of all levels and ages. She started her fiber arts career when she was 4 years old making a hand-embroidered pillow for her mom. By high school, she had won several Best of Shows at county fairs for her sewing creations.

No matter where life took Andrea, she found ways to include sewing in her adventures. At 17, she began her career in Army Journalism and public affairs. She produced television and radio stories that aired around the world, as well as writing news articles and press releases. She deployed to Iraq in 2009 and taught quilting in her free time. In 2010, a co-worker suggested she visit their alpaca farm and consider learning to work with Suri alpaca fiber. It was love at first sight! Andrea began to research how she could incorporate her knowledge of garment construction and alpaca fiber.

In 2012, she graduated from Methodist University with a Bachelor of Science in Political Science and earned her commission as an Army Quartermaster Officer, arriving at Fort Bragg, North Carolina, to learn the ropes of military logistics. While she spent her days in uniform, in her off time she found a spinning teacher to teach her the art of making yarn. By 2014, she realized that as much as she enjoyed her military career, she wanted the freedom to travel to fiber events and spend more time with her family, so in 2015 she opened Iona Rose Studio, which has become a family venture. Her son, Matthew, has also caught the fiber arts bug and competes with mom to see who can obtain the highest score at fiber arts competitions.

Andrea is an AOA Accredited Spin-Off Judge, a Martha Pullen Licensed Sewing Instructor (Heirloom I and Beginning Sewing for Adults and Children). She is a member of CABO, AOA, TKGA, and the VFW.