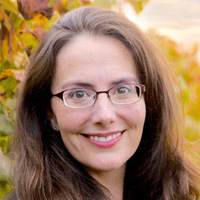 In 1996, Gabrielle came home one day with a spinning wheel and told her mother, “I want to get 4 sheep: a black one, a white one, a brown one, and a gray one.” Her mother enthusiastically responded, “No, no, no! You want to get alpacas!” “Al-a-what?” Within a few months, Gabrielle was bottle raising her first lamb and her mother bought her first alpacas. After raising a menagerie of fiber-producing animals over the years, Gabrielle settled her focus on breeding naturally colored merinos and French Angora rabbits. Her mother, Cheryl Woods of Fanfare Farms, continued with alpacas.

Raising the animals and spinning a variety of fibers has given Gabrielle a unique perspective on what is desirable in a fleece and which yarns are best suited for specific end uses. This knowledge and experience has resulted in her earning top awards in both local and national fiber arts competitions, as a sought-after instructor, and alpaca Spin-Off Judge. Spin, weave, knit, crochet, felt, dye – she does it all.

Gabrielle has served on the Board of Directors of the Northern California Angora Guild and for the National Angora Rabbit Breeders Club. She is also a past-President of the Lambtown USA Festival. In 2007, she attended the Camelid Fiber Sorting and Grading Certification course, and completed the Camelid Fiber Classer Course in 2011 through Olds College in Alberta, Canada. She owned and operated FiberWise Mill doing custom fiber processing, and now focuses her time on raising her two daughters and caring for her autistic son.